The small valley of Santa Lucia

The incredible saga of ships among olive trees

The walk along the small valley of Santa Lucia is one of the most picturesque that can be taken from Torbole. Not far from the central square you take an ancient road of Roman origin, which climbs among the olive trees and skirts the rocks on which Castel Penede stands; from here you can reach Nago in just over half an hour.
The road, which takes its name from a capital dedicated to the saint, as well as offering incredible views of the surrounding mountains, olive groves and the lake, is rich in historical charm, having been the scene of one of the most incredible naval feats of the Venetian fleet in the 15th century. 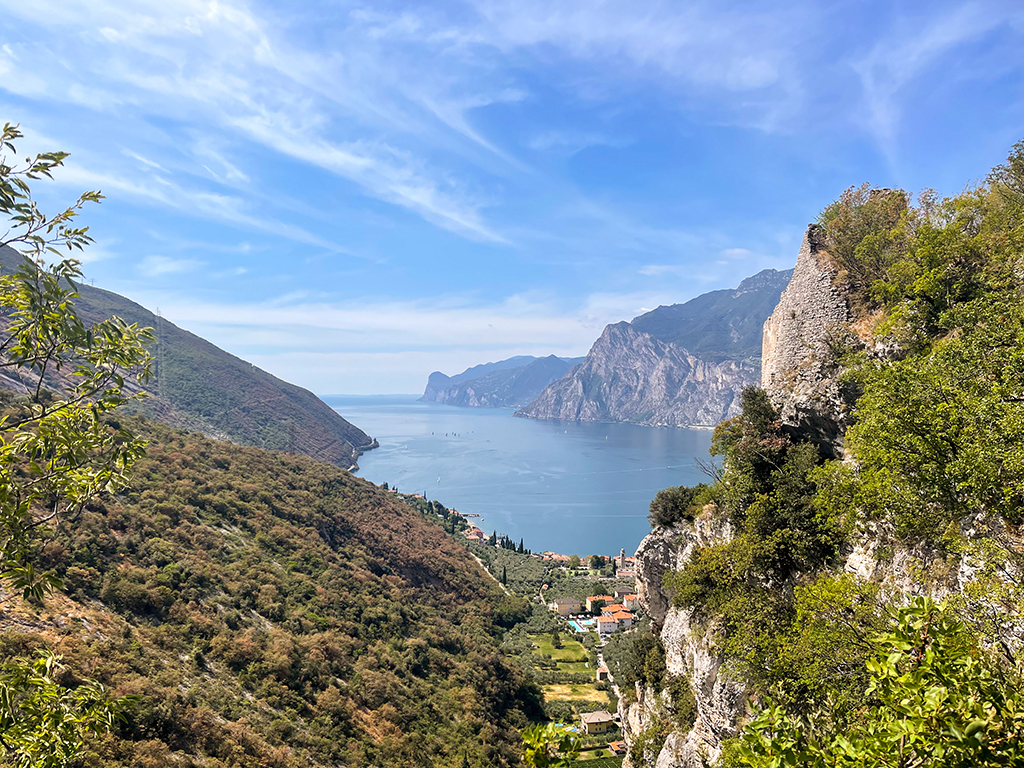 This is an easy trekking route, also suitable for families. Once in Nago, you can return to the lake by taking the old road that connected the two villages, or you can take the path that heads towards Monte Baldo, passing through the olive groves at La Gort and arriving at Busatte, to descend to Torbole from there.
This is an incredibly well-preserved landscape, where only silence reigns and in which the traces of man can only be recognised in the millenary cultivation of olive trees and in the interventions on the land through the construction of terracing and dry-stone walls. 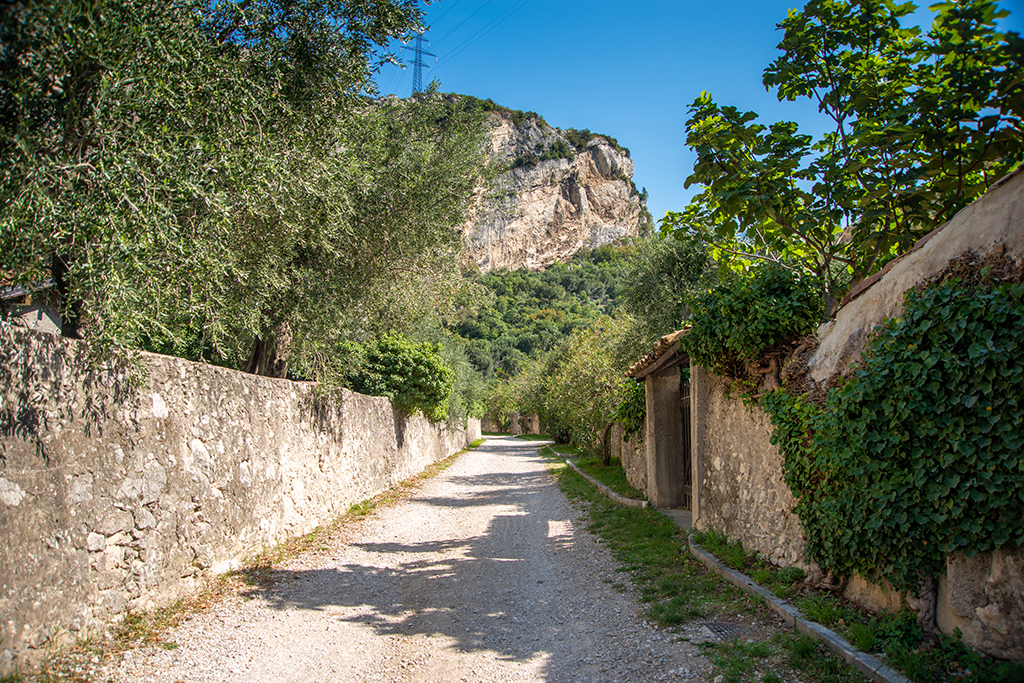 The small valley of Santa Lucia was once the only passage connecting the Adige Valley with Lake Garda. In the 4th century, the Bishop of Trento St Vigilius passed through here several times on his pastoral journeys along the eastern shore of the lake. Emperors, kings and commanders came down from here. Also from here, in 1439, an entire fleet of Venetian galleys came down! 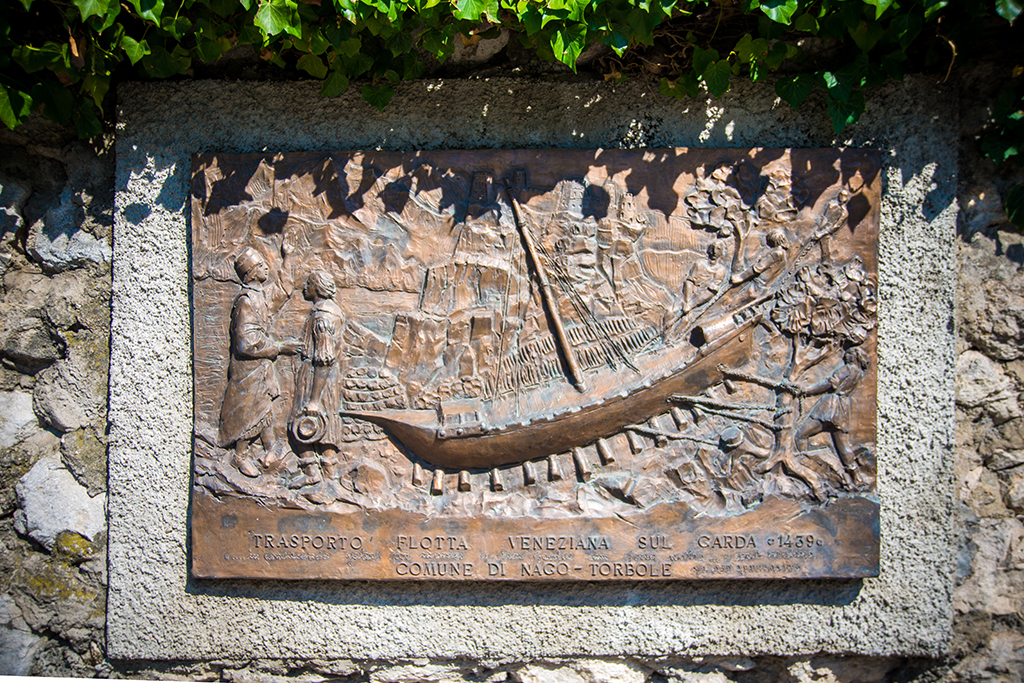 It is worth retracing this story that was a true epic!
It was the year 1438 when the Venetian Senate made a decision that has something incredible about it: to bring aid to Brescia, besieged by Filippo Maria Visconti, a fleet of ships would be transported along the river Adige and then by land, to reach Lake Garda, bypassing the enemy and surprising it from the north.
It was an old sailor of Greek origin, Sorbolo di Candia, who came up with this idea and obtained from the Senate of the Serenissima all the necessary means for its realisation.

Six galleys and 25 lighter ships therefore set out from Venice in November 1438, sailed up the Adige River and reached Mori. Then, with the help of two thousand oxen and hundreds of local sailors and men, the boats were rolled overland on rollers. When they reached Lake Loppio, they could be put back in the water for a couple of kilometres. And then the most difficult task began: the fleet was again pulled ashore and dragged up the steep slope to the San Giovanni Pass. On the descent to Torbole through the valley of Santa Lucia, the ships were restrained with large ropes secured to winches and slowly slid down to the lake shore near Torbole.
The narrators of the time say that the weight of the ships was so great that several centuries-old olive trees, to which the winches had been attached, were literally ripped from the ground and that, to slow the descent, they resorted to the trick of waiting in the afternoon for the òra, the wind of the Garda that blows from the south, and unfurl the sails of the ships to slow their descent!
In February 1439, the fleet was launched in the port of Torbole.
The complex operation, which lasted three months, cost the Serenissima Republic the fabulous sum of 15,000 ducats, but it was one of the most important works of military engineering ever carried out up to that time and, as such, became famous throughout Europe. Sorbolo received solemn honours in Venice . The Senate thanked him for his expertise ‘in conducendo galeas per montes in lacu Gardae cum gloria nostra’. 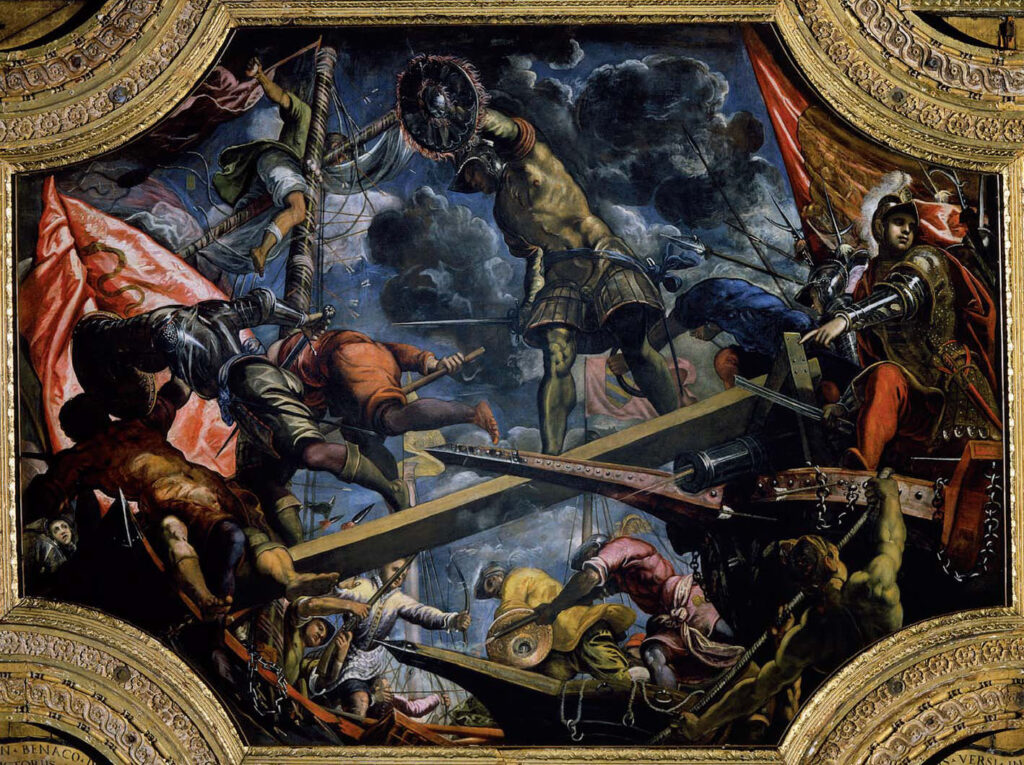 The defeat at Maderno and the victory at Ponale

The transport of the fleet, however, failed to remain hidden from the Milanese and so the surprise factor was lost. The clash took place near Maderno and the victory went to the Milanese, who were stronger in numbers. However, two powerful Venetian galleys managed to take shelter in the port of Torbole. In the course of 1439, a second and more powerful fleet was set up here with material transported from Venice via the now proven Adige-Loppio-Torbole route. In the battle in April 1440 off Ponale, the Venetians won the battle and gained complete dominion over Lake Garda.
In the ceiling of the Sala del Maggior Consiglio in the Doge’s Palace in Venice, there is a stupendous painting by Tintoretto depicting the hard-fought battle with the Milanese. 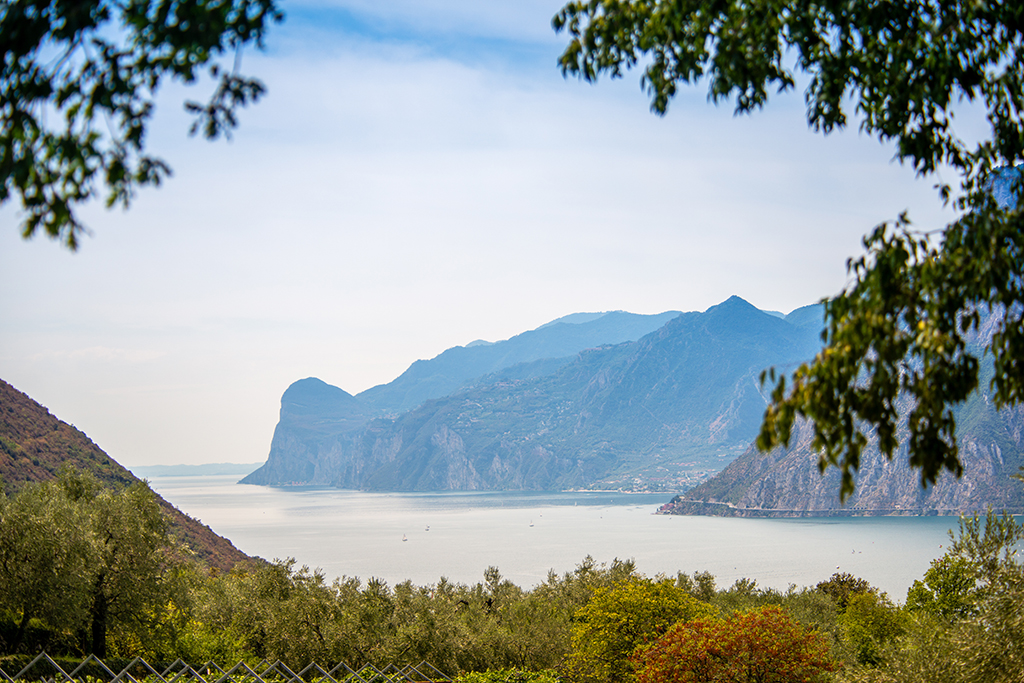 But let us return to the mainland and to the present time, finding the olive grove through which our walk winds. This is in all probability one of the oldest settlements on Lake Garda.
Always present in the Lake Garda area, the olive tree began to play a key role in the 7th century A.D., as testified by an edict of 643 that applied fines to those caught damaging olive trees in the villages around Lake Garda.

The spread in the Middle Ages

It was the great monasteries of the early Middle Ages that spread its cultivation. They needed oil supplies to light the churches and perform the sacred rites, but not enough oil was coming from the Mediterranean area. So they began to plant olive trees wherever the plant had some hope of success. In the area of Lake Garda, the olive tree found the ideal climate.
‘Garda deputavit ad olium’ or ‘Garda is destined to produce oil’. So stated Wala, the abbot of the powerful monastery of St Columba in Bobbio, in 835. This can be considered the starting date of olive growing on the Lake Garda Riviera. The shores of the lake became covered with thicker and thicker olive groves and oil mills spread almost everywhere.
Already in the Middle Ages, Garda oil stood out for its high quality and high economic value compared to oils of other origins and was used with excellent results both in food and medicine. Food use was for the few, since in the early Middle Ages ‘4-6 kg of Garda oil was worth as much as a very large pig’. 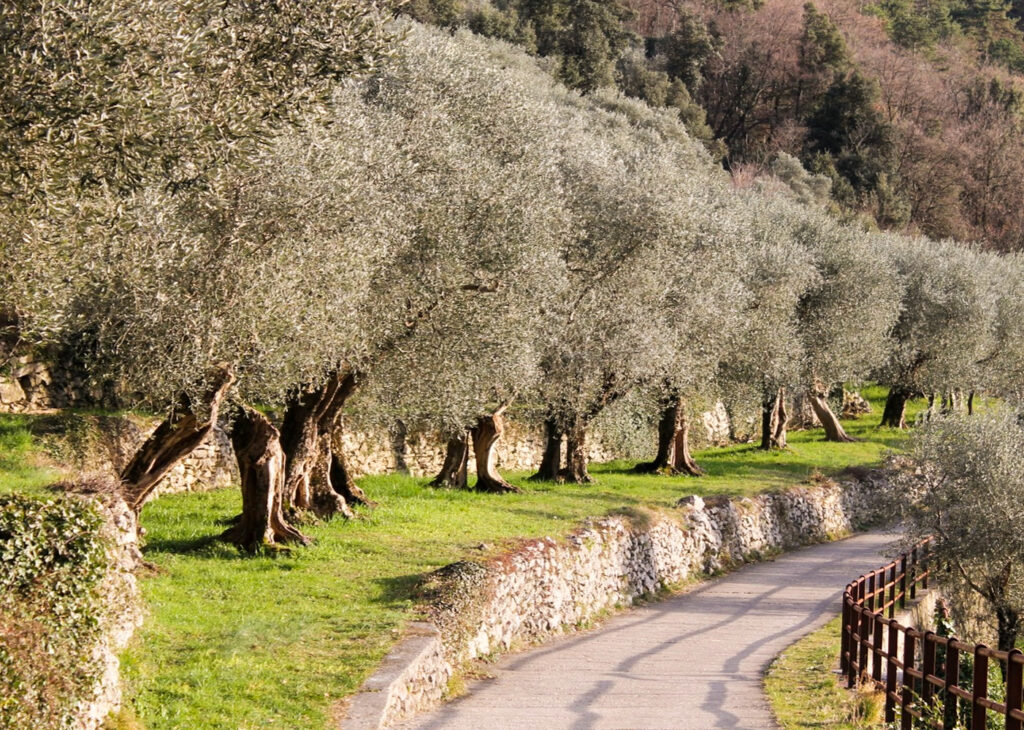 The Imprint on the landscape

During the Renaissance, the work of man contributed to outlining the characteristic features of the agricultural landscape and of Lake Garda in general. In this period, the slopes began to be redesigned with elaborate arrangements, which became true ‘terraced’ constructions overlooking the lake, suitable for the cultivation of olive groves and so typical that the area became famous, so much so that it was called the ‘Riviera degli Ulivi’ in 1968. The olive tree still characterises a large part of the Garda landscape.

From Dürer to Goethe, from Rilke to D’Annunzio, artists and poets were enchanted and celebrated the precious product of the olive tree. A parchment dating back to 1106 preserved in the municipal archives of Riva del Garda explains its cultivation methods. From it we learn that olive oil was also used to pay for indulgences!
Garda extra virgin olive oil has acquired the European PDO mark, the protected designation of origin. It is an oil characterised by fruity tones of golden apple, meadow grass, freshly mown hay, almond and hazelnut. The colour varies from green to yellow, depending on the season.